Who is this guy? The Masked Cardinal was the University of Louisville’s very own superhero, insurance risk, and one-man demolition derby. Famously running in the independent student newspaper The Louisville Cardinal from 1988-1990, the Masked Cardinal appeared in weekly strips, two full-size comic book inserts, and on t-shirts and sweatshirts all around the campus.

Collected in this volume is every single appearance of the Masked Cardinal all in a single 100-page giant comic. From his debut punching out a Jehovah’s Witness on Belknap campus to his many battles contending with an array of collegiate supervillains and local celebrities like Denny Crum and Howard Schnellenberger, the Masked Cardinal combined the sensibilities of an underground comic (or at least as much as could be gotten away with in a college newspaper) with surrealist satire and sassy superhero shenanigans.

Additionally, each episode is fully annotated — just in case you needed further proof that the artist was well and truly suffering from drunken bouts of collegiate fervor, mild dyslexia, and periodic fits of insanity while producing what can be charitably referred to as some pretty funny stuff.

Written and Drawn by: Jim Wampler
Edited by: Ken Hardin and Kevin Baker 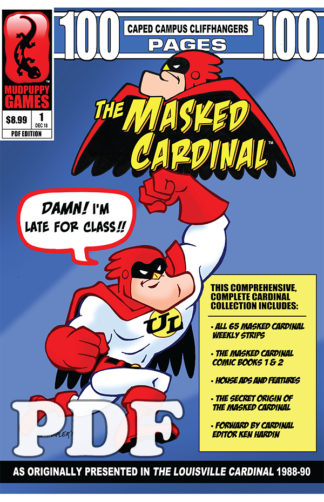