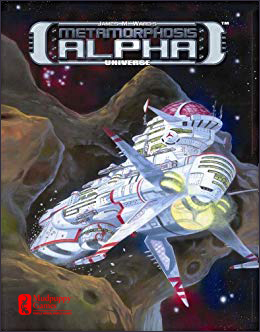 The world’s first science-fiction RPG is back! Metamorphosis Alpha™ 4th Edition is 176 pages of hardbound excitement set on the lost generational colony ship the CSS Warden. Using the 3d6 System, your marine, mutant or manic android struggles to regain control of a ship gone mad — all the while fighting off everything from insane comaputer A.I.s to alien invaders!

Get your copy from Studio2 Publishing!

GALACTA•3™ is a man-to-man tabletop miniatures game in 25mm scale. The ONE d12 SYSTEM™ rules are simple and fast to learn, and all actions can be resolved by the roll of a single 12-sided die.

Set squarely in the milieu of science fiction and science fantasy, these rules can be used to simulate battles fought in any number of popular works of cinema or literature. Realistic combat movement and battle tactics are not covered in these rules.

Instead, the rules are governed primarily by the traditions of the genre. One properly armed hero can survive a prolonged fire fight with directed energy weapons raining down all about him. A scurrilous villain and his armored minions can deal deadly damage from behind. A small robot strategically placed can turn the tide of battle. Tiny feral aliens can pick up lazer pistols and bring down an armored foe.

Buy it in PRINT from Studio2 Publishing! Buy it in PDF from DriveThruRPG!