Our 1st Anniversary issue is a giant-sized, with 120+ pages, all for the same coin. That means SCIENTIFIC BARBARIAN No.4 has all our regular features and comics, plus three (count ’em, three) compete adventures to challenge your players. Night of the Space Apes by Charles W. Vieser reveals a few of the lost secrets of the Great Disaster, while Michael Stewart’s Center of Repose is an exciting adventure that takes place among the S.A.B.L.E. Rangers he created for Issue No.1. Last, but not least, we present Jim Wampler’s Holding Up The Sky — the underground adventure half of the wilderness hex crawl adventure that began in The Shatterback Mountains from Issue No.3.

We also welcome noted sci-fi author M.C. Neuffer to our pages in this issue, with his soulful tale of one survivor’s grit and determination, Blue Sky.

SCIENTIFIC BARBARIAN No.4 has all this inside its covers, plus the usual new classes, constructs, and conjurations. 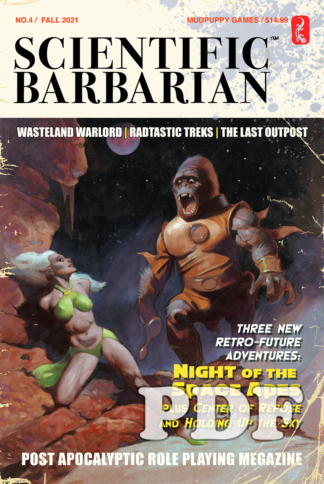